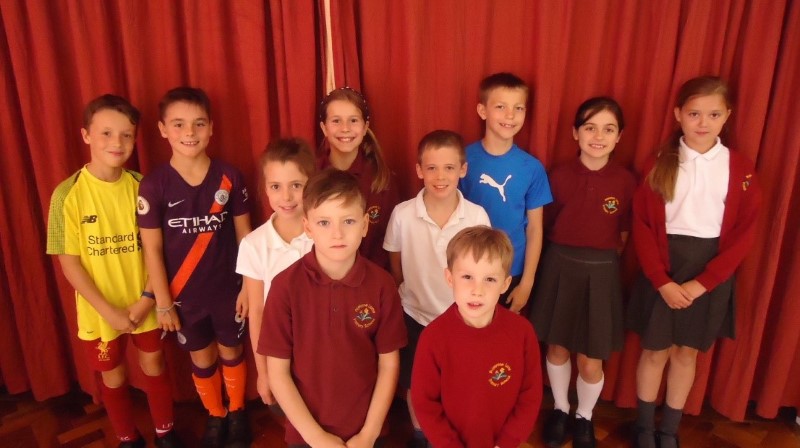 Elliot and Thomas are our Year 3 reps. They are our School Council photographers.

Isaac and Maddie are our Year 4 reps. Maddie and Isaac work alongside Blake and Florence to keep our School Council noticeboard/website up to date.

Florence and Blake are our Year 5 reps. Florence’s and Blake’s roles are to ensure our School Council noticeboard/website are up to date.

Imogen, Casper, Zara and Sam D are our Year 6 reps. Imogen is our School Council secretary, responsible for recording the minutes and supporting Florence and Blake with keeping the website/ noticeboards up to date. Sam D is Vice secretary. Casper is Vice Chair, whereas Zara was voted our Chair of School Council and will lead School Council meetings.

We are yet to have year 2 reps; but a democratic vote will take place in Year 2 (led by our Foundation Stage and Early Years reps) to gain two more representatives to join the team.

We have had our first meeting, agreed roles, regulations and a time to meet each week. We have also discussed suggestions already this year from classes on how school could be improved, as well as our vision in terms of deciding a charity/charities to support, as well as events that would make the children happier. If the children want to suggest anything for the school, or if Parents/Carers have any ideas that school can support with or implement for the benefit of the children, then please see one of the School Council representatives or Mr Jackson.
School rules
As part of our annual work on reviewing the school behaviour policy, School Council were tasked with reviewing our school rules to see if the children thought they needed changing. The three rules, and the current wording, were established in consultation with the children a number of years ago, so it was definitely time for a re-evaluation. School Council have discussed the school rules amongst themselves and also with the classes they represent. The feedback was varied and the main outcomes are as follows: Overall, behaviour at Primrose Lane is excellent and definitely helped by having a set of school rules which the children respect and comply with. Thank you to School Council for undertaking this important and meaningful piece of work – you did a great job!
Shoe Box Appeal

School Council would like to say a huge thank you to the children and Parents/Carers who donated a shoe box for the Shoe Box Appeal. In total, we provided over 60 boxes which will go to disadvantaged children throughout Europe in time to ensure they receive a present at Christmas. Well done!
The Big Morning Move for Children in Need!

The whole school loved completing the Big Morning Move to show our support for Children in Need. We all exercised for half an hour in our Children in Need spotty outfits and raised a brilliant £453. Keep it up everyone!
Visiting the Leeds Mayor
By Edie Seaton and Imogen Cooper 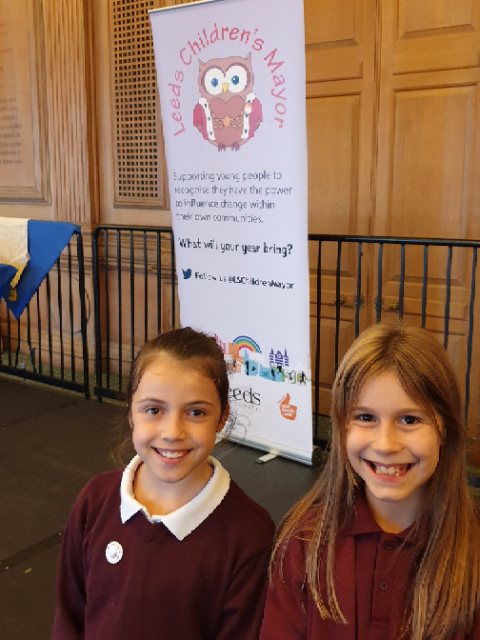 On Friday the 18th of October, Imogen and Edie went to the Civic Hall to visit the Mayor because we wrote manifestos about how to make Leeds a better place by applying to be Leeds Children’s Mayor. Imogen and Edie wrote separate manifestos, both about pollution and how we can stop it. When we got there, we got given a badge and a pen. On every table were free cakes. At the opposite side of the hall was a table covered in fruit kebabs (neatly arranged). There were also stacked up mugs and glasses next to a juice and a water dispenser. Additionally, played human bingo - that meant talking to people who we didn’t know. Then the Mayor arrived. We got photos with her and she handed out certificates. She   also   handed out more badges - even the adults got them. We   filled in a form to join Youth City Council, which is like Leeds Children’s Mayor, but we don’t need to write a manifesto. We are trying to make Leeds a better place. We filled in the form, gave it our details and read what it said. It said something along the lines of ‘You will be making Leeds a better place and receive gift bags, place your details here’.  We were also shown around the chambers.

We   got to sit in the lord Mayor’s chair! Surprisingly, there were no lights! We found out why, it’s because King Gorge the 5th said this room would look better without lights, so they had to take down the lights as a royal order. We really enjoyed the visit to Civic Hall. It was a privilege.

Written by Edie and Imogen (Year 6)

This site collects data to provide you with the best possible experience. Indeed, we collect the way you browse the site but only anonymously for analysis purposes. Click here for more information.
OK